US Patriots "Do not forget, nor surrender."

US President assassinated by while riding in an open-topped motorcade in Dallas, Texas 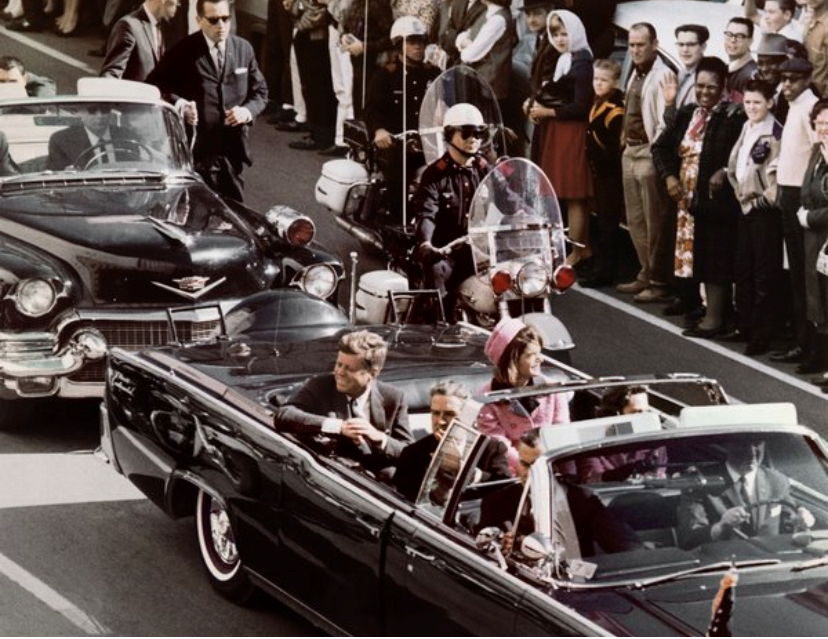 Kennedy in his motorcade in Dallas, Texas, moments before he was assassinated

Today is the anniversary of JFK's killing because he loved America.

Georgia on My Mind...

“Georgia Is the First State I’m Going to Blow Up and Mr. Kemp and the Secretary of State Need to Go With It!” — Sidney Powell Releases the Kraken! (VIDEO)

Breaking — ‘Piece of hardware has been secured from Germany’…

Today, the U.S. Food and Drug Administration issued an emergency use authorization (EUA) for casirivimab and imdevimab to be administered together for the treatment of mild to moderate COVID-19 in adults and pediatric patients (12 years of age or older weighing at least 40 kilograms [about 88 pounds]) with positive results of direct SARS-CoV-2 viral testing and who are at high risk for progressing to severe COVID-19. This includes those who are 65 years of age or older or who have certain chronic medical conditions.

I could not agree more with Governor @BrianKempGA that it would be appropriate to audit mail-in ballot signatures against a valid database.

This will be critically important for future elections in Georgia. https://t.co/Nb6iiL9Qje

I’m also encouraged it appears the Georgia Governor is willing to work with the state legislature to improve mail ballot signature verification requirements.

Sidney Powell has expanded on the scope of the Dominion scam

Democratic congressman says Trump and allies should be tried for ‘crimes against our nation;' Gaetz hits back: 'Disgusting'. Projecting the Ds crimes?

The lawmaker said, 'The Republican Party is unfit to govern and doesn't give a damn about you'  Less than two weeks ago, Rep. Alexandria Ocasio-Cortez (D-N.Y.) was smashed with backlash for demanding a list of "Trump sycophants" so that they will be held accountable in the future. Now, another Democratic politician has called for punitive punishment against President Donald Trump and his allies. Rep. Bill Pascrell Jr. (D-N.J.), who is a staunch critic of the president, has called for Trump and his "enablers" to "be tried for their crimes against our nation." Earlier this week, Pascrell issued a press release demanding a "widespread investigation" and prosecution of "Trump government crimes."

“Donald Trump and members of his administration have committed innumerable crimes against the United States," Pascrell claimed without providing proof. Pascrell listed a number of unsubstantiated accusations, by saying, "He has endangered our national security. He ripped families apart. He poisoned the Census. He has personally profited from his office. He has attacked our elections and sought to throttle democracy."

The Democratic congressman baselessly alleged that the president "engaged in treason," a crime punishable by death.

"Therefore, in 2021 the entire Trump administration must be fully investigated by the Department of Justice and any other relevant offices," Pascrell said in the statement that was released on Tuesday. "Donald Trump along with his worst enablers must be tried for their crimes against our nation and Constitution." Pascrell added, "Importantly, any further abuse of the sacred pardon power to shield criminals would itself be obstruction of justice, and any self-pardons would be illegal.  Pascrell contended that not punishing Trump and his allies only "emboldens criminality by our national leaders and continues America down the path of lawlessness and authoritarianism."

By Pascrell has been harshly critical of Trump challenging the 2020 election results, and said the president is attempting to "steal the election he lost badly."

"Crybaby trump is calling local officials demanding they overturn an election he lost badly and throw out ballots because they voted against him," Pascrell tweeted. "He will leaving office by January 20."

On Saturday, Pascrell claimed that the "Republican Party is unfit to govern and doesn't give a damn about you."

Her husband is massively older than her. He was born on July 16, 1931. Dana Perino Italian last name.

Was a Bush girl as she served as a 24th press Secretary of White House, under President George W. Bush.

Which made her a household name and TRUSTED.

She looks so innocent and all-American and is a staple at FOX News. Her husband is former Australian Politician.'

She did not take his last name.

They both constantly talk about the dog Jasper they share.

Perino worked as Editorial Director for the Imprint Crown Forum of Crown Publishing Group, a division of Random House, Inc. LOOK at this and ask yourself if any bells get ringing in your head or not:

Dana Perino husband is familiar with moving of merchandise, food retail and international marketing and sales of medical products:   He is well known as a business person who is expert and experienced in Supply Chain Management, Merchandising, Labor Relations, etc.

In 1949, Peter involved in the Citizen Military Forces.  He serves there for several years and reached the position of sergeant in the 7th Field Regiment. In 1954, he wanted to join the Labor Party. After that, he actively appeared in Labor politics.

Later, in 2002, he joined the merchandise retail company, Tesco.

He became the distribution and supply chain director of Sainsbury’s, which is one of the largest chain supermarkets in the UK.

In 2006, he was hired as the CEO of the Loblaw Companies, which is one of the largest Canadian food retailers. He worked there for 7 years. He left in 2013. Furthermore, he performs his duties as President and CEO of Shopko, since 2013. Shopko is a chain retail store, located in Green Bay, Wisconsin. It was established by James Ruben in 1962. Peter’s net worth is approximately $10 million.

He also has two kids, son Barry and daughter Kelly, form his past relation.

Moreover, he has two grandchildren named, Rachel and Sebastian.

Numerical Corroboration with Timing of Deliveries

This corroborates the testimony of 4 witnesses that 100,000 phony Biden ballots were brought in at @ 4:30am and counted without any inspection. All were for Biden and they were all phony. https://t.co/lQQTGhD3LK

Graham's Questioning of Kavanaugh was... Curious...

Sen. Lindsey Graham’s curious questions to Judge Kavanaugh on military tribunals for U.S. citizens.   9/13/18.  It is noteworthy that of all the constitutional rights to which American citizens are entitled, Sen. Graham specifically mentioned the Fourth Amendment, which prohibits unreasonable searches and seizures and requires “reasonable” governmental searches and seizures to be conducted only upon issuance of a warrant, judicially sanctioned by probable cause. On December 21, 2017, President Trump signed an executive order blocking the property of persons involved in “serious human rights abuse or corruption”.

Sorry Liz, can’t accept the results of an election with hundreds of thousands of fraudulent votes cast, enough to easily flip the Election. You’re just unhappy that I’m bringing the troops back home where they belong! https://t.co/elZ9X3wrAz

"We have to get to the bottom of it."pic.twitter.com/u9UOYa0A4B

Was President Trump’s 2020 Board Member Tony Shaffer Hinting on November 6th That the President Was All Over the Major Fraud Now Being Uncovered in the Voting Machines?

A couple of days after the 2020 election, President Trump 2020 Advisory Board member Tony Shaffer provided us comfort noting that the President has a great case and will win his case in the courts.

This is what we shared three days after the election.

Tony Shaffer is a retired Intelligence Operative and current President of the London Center for Policy Research and a member of President Trump’s 2020 Advisory Board. He believes the President won the election and has a great case in the courts to prove it.”

Now we have uncovered that in 2019 Shaffer discussed the efforts being taken to prevent interference in US elections especially as related to voting machines:

Some 54 scientists have resigned or been fired as a result of an ongoing investigation by the National Institutes of Health into the failure of NIH grantees to disclose financial ties to foreign governments. For 93% of the 189 scientists whom NIH has investigated to date, China was the source of their undisclosed support.

NAACP Jumping in the "Fight"

The NAACP Legal Defense Fund said it filed the new suit in a D.C. federal court on Friday on behalf of the three voters and the Michigan Welfare Rights Organization. The suit asks a judge to block Trump and his campaign from "continuing to exert pressure" on officials in Michigan, or any other state.