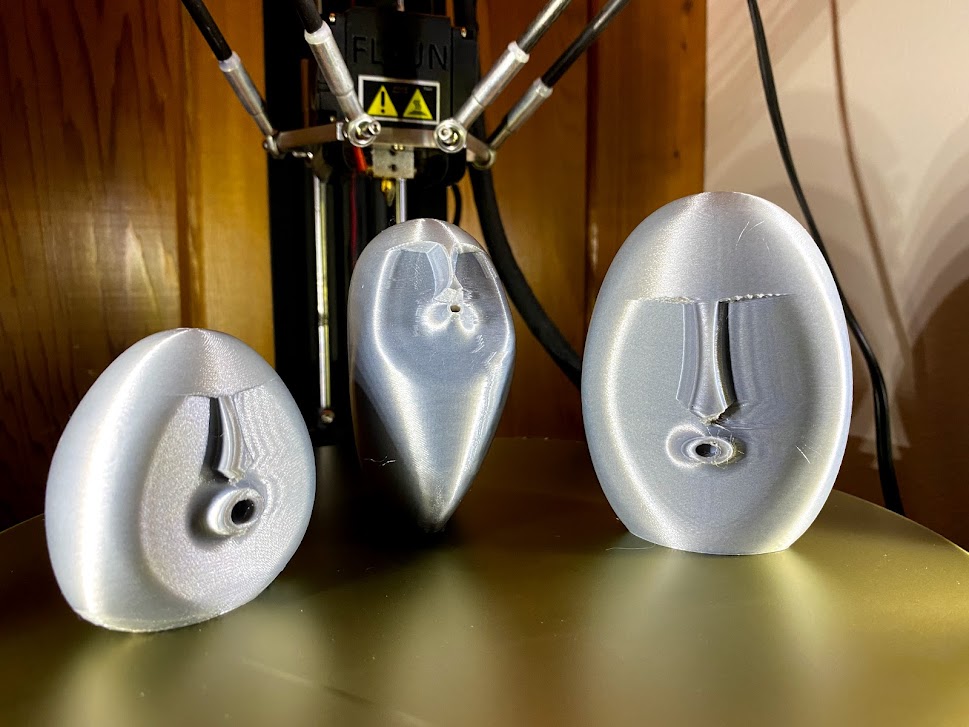 I've had my FLSUN QQ-S Pro for a few months now and I love it. I'm a tinkerer, though, so my tinkerer spirit was not satisfied with the stock machine (which, out of the box, is just plain impressive) so I set out to find the best modifications I could get for it.

While setting out to find modifications, I decided on what I really wanted my machine to be. Here's a list of that criteria:

The stock power supply that came in the unit was taller and louder than the Meanwell. The Meanwell power supplies have served me well in the past with my RC Helicopter hobby so it was a trusted name. The added 2.5 cm of clearance gave me room to put the Raspberry Pi and two LM2596 buck converters (one for the Pi and one for the Noctua fans) all inside the compartment at the bottom of the printer!

The optical endstops added reliability, consistency, ease of use, and silence. Originally, the printer came with mechanical switches as the endstops. This meant that, when homing, the carriages would have to physically strike each switch to trigger it and alert the motors to stop. With the optical endstops, no physical contact has to be made and, since there are no mechanics, there is no wear and tear. This was a fairly simple drop-in replacement but I did have to lengthen one of the cables supplied with the endstops.

The TMC2209 stepper drivers in UART mode have got to be one of my favorite upgrades! The stepper motors in the unit are fairly quiet from the factory but when the TMC2209s stepped in, the printer was smoother and nearly silent, save from fan noise.

You can find out more about my upgrade in the article below:

Klipper takes the processing of the GCode for the machine off the onboard controller and onto a much more powerful computer, such as a Raspberry Pi. This results in cleaner commands to the printer, faster printing, smoother movements, quieter operation, and a robust way to tweak the printer to my liking.

The switch to Klipper was simple for me, since I was already using a Raspberry Pi running Octoprint to manage the printer over the network. The Octoprint software was replaced by Klipper, MainsailOS, and Moonraker. This gave me a new, fresh, and clean interface to work with. Most slicers support Octoprint and Moonraker can be set up to accept Octoprint's API calls so this required zero changes on my slicers.

The Delta Arms on the upgraded version of this printer, the Speed Racer, are dampened to help dissipate vibrations and resonance. Several folks have made printable dampener parts for the QQ-S Pro but I didn't like any of them. I designed my own C-shaped clips to hold together a rubber band and that did the job for me. Resonance was minimized and I could print faster without waviness on the outside of the print.

One of the problems with the QQ-S is the 780mm long Bowden tube. It's a PTFE tube that the filament rides in on its way from the extruder to the hotend. The problem lies with the flexibility of the tube and the friction inside the tube, making flexible materials difficult to extrude and all movements of the extruder to be exaggerated vs. direct drive counterparts. A 2mm retraction on a direct-drive printer could turn into a 10mm+ retraction with this length of a Bowden. This was resulting in slower printing (due to having to slow down the print so the extruder could keep up without stripping or breaking the filament), stringing, and tuneability/consistency issues.

After researching several solutions, the one I settled on was the flying extruder. I was on the fence about it because I had seen some of the implementations of it on Thingiverse and did not like how dirty it looked. I then saw it on the Anycubic Predator and I was sold.

I had most of the materials I needed in-house so I set out to make the modification and I'll never look back! Benefits included cleaner, consistent prints, less stringing, much lower pressure advance settings, the ability to print flexible filaments faster, nearly silent extruder operation (due to not being hard-mounted to the frame), and I achieved an approximately 15-20mm total Bowden tube length!

The probe holder modification was purely for convenience. This piece stores the probe neatly on one of the towers and gives a place for the cable. I recommend printing it at 0.2 or 0.3 with no infill to allow it to flex enough to install.

The fans in the QQ-S are unbelievably loud. To fix this, I purchased Noctua fans. To implement the fans, a buck converter is required to deliver the 12V power these fans need (the power supply in the QQ-S is 24V).

Raspberry Pi in the base

Consistent with having everything neat and tidy, I rotated the main board 180 degrees to put the USB port inside and I placed the Raspberry Pi, along with its buck converter in the base, on top of the power supply. This allowed the Pi to be cooled by the main fan and kept everything inside the case for a very nice, tidy look.

In preparation for a camera and, because it just looks cool, I added LED illumination to the two front towers. I used the following print on Thingiverse:

The design is decent but it has issues. If it is slightly off, the carriages will hit it, resulting in a belt skip and/or a bed strike. I will be re-designing the part in the near future and I'll post a link to it here.

NOTE: The LED strips are 12V but the power supply is 24V. If you're doing the Noctua Fan Mod, you'll already have a buck converter in place so you can run your LED strip cables there. When I originally installed them, I did not have the Noctua fans installed so I wired the strips in series. This circuit split the voltage between the strips, giving me 12V at each side.

The lattice glass build surface on the QQ-S is gorgeous. One of the problems, though, is that I don't have the patience for the build surface to cool so I can get my prints off it. Additionally, I screwed it up by printing with the probe on, miscalculating probe offset, and a bunch of other stupid things I did while learning. I was going to replace it but then I saw the magnetic flexible build system by FYSETC. I picked up the system and an extra build plate, which allowed me to quickly swap between build surfaces and use the flexible plate to pop prints right off!

To help direct air around the main board, I printed this fan shroud. I may re-design it in the future but it will do, for now:

I wanted to take advantage of the feature in MainsailOS/Moonraker that allows me to attach a camera to the Raspberry Pi and watch my prints remotely. The Logitech C270 camera is an inexpensive camera with great support that is just plug & play.

Right now, the camera is mounted to a bookshelf near the printer. I'll be designing a camera mount as soon as I figure out how I want to execute it!

The QQ-S comes with horrible cable management to the top of the printer. To assist in this, I printed several parts.

This piece holds the umbilical cord all the way up the tower and keeps it out of the way:

This piece will keep your endstop cables from being tangled up in the carriages (how in the world did the factory miss this??!!):

Backup of Klipper Configuration to Github

This was a quick and easy way to ensure my printer configurations were preserved. I have mine running on a weekly schedule so any updates are sent on Fridays: